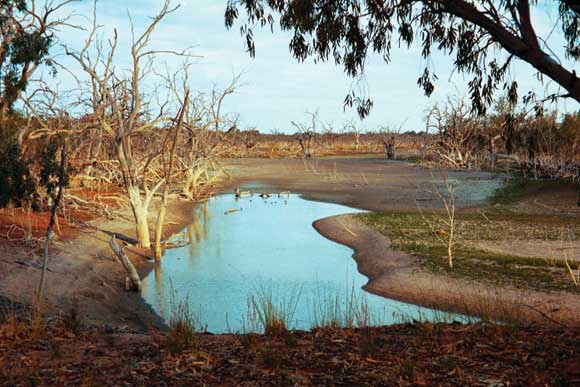 Australia is experiencing a water emergency, and nowhere are the problems as urgent and as complex as the Murray Darling Basin. What is needed is nothing less than a change in the way we think about water and the way we share this limited and precious resource.

The Basin is in the midst of a crisis - environmental, social and economic. It needs focused serious political resolve. Now.

The Murray Darling river system is in crisis. Southern and eastern Australia are running out of water. Inflows to the Murray Darling are at their lowest in 116 years. Water storages and irrigation allocations are hitting their lowest ever levels. Cities and towns dependent on the system are experiencing a water security crisis, instituting severe restrictions and yet are still unable to guarantee ongoing supplies.

Irrigators' water allocations have been slashed or suspended altogether - meaning they have been unable to plant crops or have had to heavily prune or even bulldoze permanent plantings. The ecosystems of the basin are dead and dying. We have already lost 90% of the wetlands in the Murray Darling Basin and bird numbers are in dramatic decline, with average numbers falling by 80% in 25 years. Wetlands and floodplains have gone extended periods without sufficient water and have been severely degraded, many potentially beyond the point of recovery.

On historical patterns, the current drought could continue until 2014. The impact of climate change means we could be seeing a permanent change in rainfall patterns. Over the last 30-50 years the system has been transformed from a highly variable flow regime to a highly regulated one in an effort to increase the reliability of water supplies for towns and irrigation. This has had a profound impact on ecosystems adapted to cyclic flooding. At the same time the system has been massively over-allocated during a period of unusually high rainfall.

Water licence and allocation systems vary greatly across state and regional boundaries, and the process of reforming allocations into a single system has been bogged-down by the complex governance of a river system that encompasses four states and one territory. Coupled with this is the intense resistance to change from various state and federal levels and from a range of industry groups.

The Greens believe that we need to act immediately to address over-allocation and to provide significant support to affected landholders and communities to help them transition to sustainable new enterprises. Urgent action is needed, yet the government's whole-of-basin plan won't kick in until 2014. For many this could be too little too late. We have been borrowing from the future with no plan to take us forward and no guarantee that the rains will come in time to save the river and our rural communities ... and every reason to suspect that the drought could continue.

There is an urgent need for governments to act to prevent a serious tragedy for our community and a disaster for the environment. It will never be business as usual again in the Basin. We need to transform the way we co-exist with the Murray and Darling Rivers. We need to work with the Traditional Owners of the Basin to respect and preserve the river's cultural heritage.

We need to address the problem of over-allocation in an equitable and sustainable manner. We need to ensure the system we put in place is responsive to seasonal variations and climate change and is sustainable for the long-term. We need a system that will work straight away, but can be adapted and improved as we learn more.

We need a system that is open, transparent and equitable, so that all users can see the resource is being shared wisely. We need a system that strives to give all stakeholders greater certainty, and yet still guarantees the survival of precious riverine ecosystems, wetlands and floodplains as well as our communities.

Above all we need a whole-of-basin plan with "hydrological integrity" in which all water interception, extraction or use is properly accounted for - including floodplain interception and harvesting,  plantations and farm forestry, groundwater extraction from bores, and farm dams.

The authority's decisions need to be firmly based on strong evidence. This will require a commitment to ongoing hydro-geological assessment of available water and ongoing monitoring of ecosystem health and resilience to allow us to set, monitor and adaptively manage the cap on sustainable extraction levels at local, regional and basin-wide scales.

The need for urgent action

This is a crisis and we need quick action.

The decision to honour existing water sharing plans means that the cap on sustainable diversions will not come into effect until 2014 (and possibly 2017 for parts of Victoria). This is far too late. We should be rolling out a new plan immediately, based on the best available science, and acting quickly to minimise the risks. We want a plan that is equitable and delivers as much certainty as we can within the limits of sustainability, but we can only honour existing water resource plans to the
extent that they are actually sustainable.

We support compulsory acquisition as an option of last resort. In some circumstances farmers might want to negotiate with the government to compulsorily acquire their water so that they get access to ‘just terms’ payments. These payments are likely to be much higher than market values, especially
if land prices crash, and are exempt from capital gains tax.

The Greens do not want to see farmers walking off the land. This would be both a social and an environmental disaster – because of the impacts on the viability of rural communities and the threats posed by unmanaged cleared land in terms of weeds, feral animals and erosion. This is why we have been pushing hard for a national plan for the future of Australian agriculture in a changing climate.

The whole-of-basin water management plan needs to be part of a larger regional planning process that addresses the future of agriculture and the viability of rural communities within the basin.

The impact of drought and climate change on the productivity and viability of Australian agriculture is one of the nation’s most pressing economic and environmental issues. This is why we have been calling for a national plan for agricultural adaptation and recently secured the establishment of a Senate Inquiry into the sustainability of our rural communities in a drying climate.

We believe that governments have a responsibility to plan for and invest in the future of rural Australia. Rather than continuing the current model of exceptional circumstances payments, we should acknowledge the extent to which these conditions are no longer ‘exceptional’ … and that for some areas there will not be a return to business as usual … and put into place support to help farmers realistically evaluate, diversify and transition their enterprises to more resilient farming systems that better manage climate risk. This will require investment in developing sustainable new rural industries and support to establish new enterprises.

We need to invest in more research with incentives to support investment in developing new industries to suit a changing climate. We also need incentives (such as stewardship payments for ecosystem services) in some regions to keep farmers on the land managing native vegetation, a vital store of carbon in the face of climate change, and protecting the land from pests and weeds.

“Australia’s agriculture, forestry and land management interests are exposed to the impacts of climate change… [so there is] an urgent need to understand the social, economic and biophysical implications of climate change on this sector and to develop adaptive responses accordingly.”

Our Government has already squandered many opportunities to address this issue – the time to act on this is now.