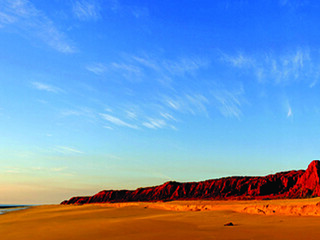 The Australian Greens are continuing efforts to prevent the development of an LNG hub at James Price Point in the Kimberley region of WA.

We believe that James Price Point is not a suitable location for an LNG processing hub and that such a development will have long term negative impacts across the region.

A recent WA Supreme Court ruling- that the compulsory acquisition process undertaken by the WA Government was invalid- must lead to a complete review of the development.

The threat of compulsory acquisition was a significant factor in the deal struck with the Kimberley Land Council. The WA Government undermined the negotiation process by virtue of this threat, which has led to ongoing community dissent and unrest. Throughout this process, the WA Government has taken a development at any cost mentality, this must change.

Read more about what I and the other Federal Greens MPs have been saying and doing on this issue.

During 2011, Wikileaks cables about the development of a gas hub at James Price Point cast increasing doubt over the legitimacy of the development. The cables have indicated there was Government pressure on the joint venture partners to accept Woodside's choice of development pathway.

The mining and resource sector attracts some of the world's brightest minds. By using this intellect, the joint venture partners appear to have come to the same realisation as many West Australians - that the gas hub should not be located at James Price Point.

The Pilbara offers a far stronger alternative than James Price Point. It seems to me that the federal and state governments, along with Woodside are the people who are committed to placing this area of the Kimberley in the firing line of development.

There are parallels between the behaviour described in these cables and the flawed negotiation process conducted between the WA Government under the leadership of Premier Colin Barnett and the area’s Traditional Owners.

There are already a number of questions and lingering doubts the gas hub project and this revelation simply adds to them.

A recent report released by the Australia Institute report has shown that community concerns about the social and economic impact around the James Price Point development are justified.

The report shows that Kimberley residents could expect a variety of questionable social and economic effects in their community.

There may be less employment or job security for workers in fields such tourism and education, and wages in these sectors will not increase to match the increased cost of living.

It is also likely that local businesses in other sectors would experience increases to the cost of skilled labour and services such as construction.

A common resource sector claim is that they create local flow-on employment. In reality, the same can be said for any sector whose workers spend their income in the local community.

A fly-in, fly-out or frequently transitioning workforce will not necessarily be spending this income in the communities closest to the development.

Sectors such as accommodation and food services, agriculture, fisheries, marine and recreation would employ more people and offer a more sustainable future for the Kimberley.

A smart and sustainable future for the Kimberley would also lead to long term economic benefit and security for people throughout the region.

It is important to remember that irrespective of where the gas is processed, there should be a financial benefit returned to the Traditional Owners in the Kimberley.

The Traditional Owners should benefit from any gas extracted from this region, but that does not require the processing hub to locate at James Price Point.