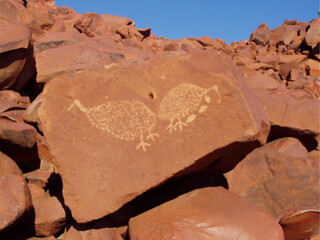 The Burrup Peninsula in the north-west of Western Australia has been described as ‘the largest outdoor art gallery on the planet.'

Over tens of thousands of years, the Aboriginal people of the Pilbara carved thousands of enigmatic ‘petroglyphs' into the red rocks of the Burrup and islands of the Dampier Archipelago. It is estimated there may be anything up to a million of these images carved into the iron-hard rocks of the Burrup and surrounding islands of the Dampier Archipelago.

In the 1960s the iron-ore port of Dampier was founded, followed by the establishment of the Woodside on-shore gas plant in the 1980s. All told, at least 10,000 petrolgyphs have been destroyed or relocated, and the southern third of the Burrup has been disfigured by roads, powerlines, infrastructure corridors and other installations.

Another wave of industrial development is now being planned. For more information, visit www.standupfortheburrup.com