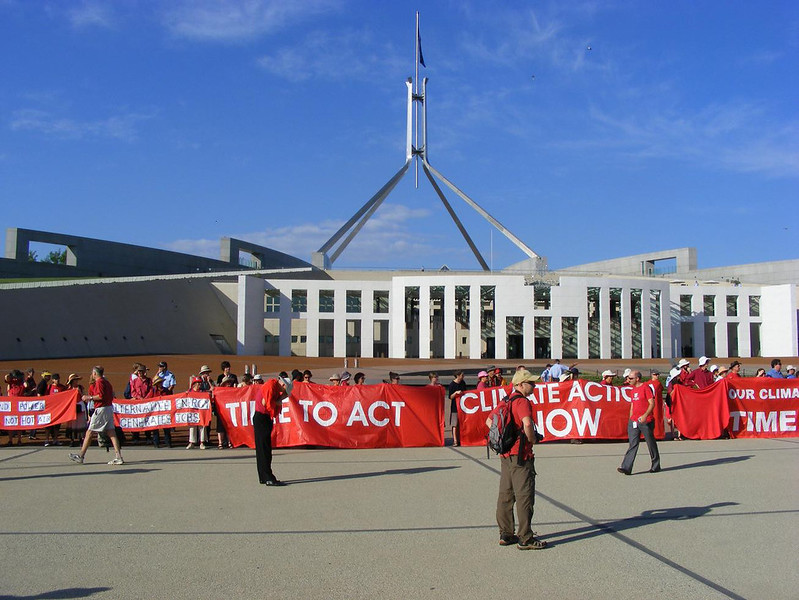 On Monday, Dec 15, the Government announced their 5% emission target, which is a global embarrassment and a recipe for global catastrophe.

Kevin Rudd has put the coal industry ahead of Australia's children and grandchildren. It will be much more expensive to rectify this historic mistake in the decades ahead.

A strong target can see Australia play a responsible part in the global effort to avoid catastrophic climate change. A weak target dooms Australia to continuing the climate change denial of the Howard years and will help to undermine strong global action.

Climate Summit Day of Action
On Tuesday 3rd February 2008, a day of action has been organised, to converge on the lawns of Parliament House, Canberra. We will form a human circle around Parliament House.
If you can't attend, you can still make your voice heard by signing our petition against Rudd's emission targets, which we will deliver to the Prime Minister on the first sitting day of Parliament.

Acting just a little bit is not an option
If we breach tipping points in our climate, we will set in train runaway climate change that no human action can stop. We must do whatever we can to prevent that nightmare from becoming a reality.
The stakes are so high, there can be no white flag of surrender on climate change.

You can act now on Climate Change!

There should be no surrender on climate change
The Government's reduction of greenhouse emissions by 5% of 2000 levels by 2020 is nowhere near enough to avoid catastrophic climate change.
Australia must head for zero net carbon as soon as we can - and no later than 2050 - with reductions of at least 40% below 1990 levels by 2020 on the way through.
In the Senate, the Greens will move to fix the Government’s targets to make them more credible.

On Tuesday December 16 2008, the Greens organised protests across the country, to allow people to express their disappointment at the Rudd Government's emission targets.

Join the campaign today!
Would you like to join the GreensMPs in campaigning for a better Australia?

You can make a difference, through direct lobbying of your Government, working with the media to get word out or simply showing your support for your GreensMPs.

Simply sign up below and we'll send you information enabling you to take action on a variety of environmental, community and political issues.
<?php