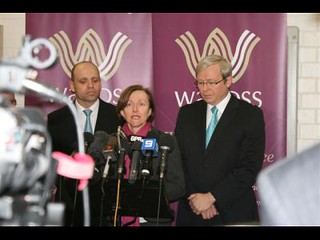 Prime Minister Kevin Rudd: It's good to be in Perth today and good to be here at WACOSS and to be here with Senator Siewert from the Australian Greens, and of course Senator Mark Arbib, the Minister for Employment. What we're here today to talk about it is practical measures that you can take to reduce the impact of the global economic recession on jobs in local communities. That's what Government action is all about. Nationally, how do we implement measures which cushion the impact of the global economic recession on Australian working families and those doing it tough.

Just now we've met those in the community sector, for example, who are out there at the front line, assisting families who are in need of emergency relief payments, and you would have heard the reports from some of those community organisations about how difficult it is. The Government has increased our payments for emergency relief to the community sector. Plainly, however, there is more work to be done. I've listened very carefully to what was said before by one of the representatives from Uniting Care about the number of families now being turned away in terms of emergency relief payments.

What we're here to do today is to announce those successful projects from round one of the local jobs fund here in WA, and from this initial allocation of .5 million here in the West we'll be providing support for six projects that will in turn support some 190 jobs and 60 work experience positions, as well as three traineeships.

Of course, what we've seen today is a very practical illustration of the sort of work that that can involve, and that is through this WACOSS-supported initiative, to support those who are conducting energy audits out there in the community, energy audits of community organisations themselves, so that they can reduce their electricity bills, their gas bills and their water bills - doing something positive for the environment and at the same time something positive in terms of the bills that they've got to pay.

I might turn now to Senator Siewert to make some remarks, and again I place on record my appreciation for the support of the Australian Greens in securing passage for the Nation Building for Recovery Plan in the Senate, and their particular involvement in this fund, and then I'll turn to Senator Arbib.

We were also very pleased to be able to work with the Government. I think that the Greens demonstrated that we can work with Government for positive outcomes. This is a positive announcement. We decided that we wanted to work positively with Government to achieve an outcome, and we have. We can see today that we have achieved an outcome. There are going to be real jobs provided in this community, and I'm particularly pleased, of course, that it's in my home state of Western Australia.

We have such innovative projects, not only this project but the project working with West Swan TAFE, that's particularly training people to work with community on drug and alcohol related issues I think is also a very positive demonstration of what we can achieve through this economic stimulus package.

So, again, I'm pleased with my colleagues here in Parliament because I think it's a very good demonstration about the way the Parliament can work when we all it to reach a common goal, and that is to help the community.

Thank you very much, and I'm very pleased, as I said, that we're in here in Lotteries House working with such a great group of people. Thank you.

Minister Mark Arbib: Thank you, Prime Minister, thank you Rachel, and I also place on record my appreciation with the Australian Greens and also to Senator Fielding for the work they did in terms of the jobs fund arriving out of the stimulus package.

We've got some wonderful projects that we're announcing today. As the Prime Minister said, six projects in Western Australia, the majority in Perth, .5 million, which is going to support 190 jobs and support 60 work experience positions plus three traineeships.

Some of the projects, as we've seen, WACOSS' climate change readiness for community project, and that's .89 million. They've also got a second project, which is million, which is to establish a labour pool of 38 retrenched workers in the Kwinana-Rockingham area, and they're going to be working with local community organisations, using the skills that they have from their workplace to assist community groups in that community.

Swan TAFE, as Senator Siewert said, is receiving 0,000 and that will be to support 52 apprentices that they have, and also to create or retain 50 work experience positions, and they will be working, as Senator Siewert has said, in terms of the construction of residential training facilities for Palmerston Farm, which is a not-for-profit organisation.

There's also two Indigenous organisations that have received funding. The Martu people have got a media project which will support 12 jobs and 10 work experience jobs with Goolarri Media Enterprises, which is receiving 6,000.

And again, the jobs fund is part of the stimulus package, but it's only one part of the stimulus package. At the same time, we are rolling out the construction of primary school halls, libraries and classrooms across Western Australia. Currently, there's 934 schools that have been approved. That's going to be .5 billion worth of funding, every school in Western Australia, primary school, high school, public school, private school, is receiving between ,000 and 0,000 for school maintenance.

Of course, we're doing something like 2,200 new community houses in Western Australia, and in transport, I'm sure you know we've got the Kalgoorlie to Adelaide railway, on which work which work will soon commence, and also the Mandurah entrance road construction which will also soon commence. So we are doing everything we can to support jobs in Western Australia because we are in a global recession. Unemployment is rising, and we can't afford to take any job for granted.