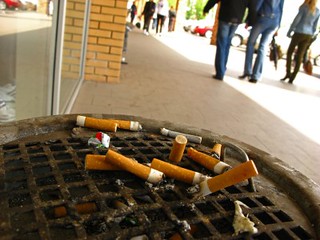 The Australian Greens will push for a floor price on cigarettes amid tobacco industry threats to slash prices if the government’s legislation for plain packaging is introduced, with the funds raised going to cancer research.

Australian Greens health spokesperson, Senator Rachel Siewert said today that the tobacco industry was "fighting for its life, but not the health of Australian, with plans to flood the market with cheap tobacco".

"The Greens believe the best way to guarantee health outcomes from the proposed plain packaging legislation is to combine that measure with a minimum price for cigarettes," said Senator Siewert.

"The health minister rightly points out that this is a fight between protecting profits and protecting people. It shows how desperate the industry is that they will stoop to these levels.

"The Greens have long been advocates for a minimum price for alcohol, to avert deep discounting, and the same approach should be applied to cigarettes," said Senator Siewert.

This year the Greens discovered via the Senate estimates process that the tobacco industry had made almost 20 FOI requests to the Department of Health for thousands of files at a cost to the taxpayer of $1.5 million. Further information on the cost of meeting the industry’s excessive demands is due out today.

Documents tabled in Senate Estimates reveal the excessive requests under FOI to the Department of Health and Ageing - including detailed requests initially costed at over $1.4 million before taxpayer funded negotiations with Big Tobacco saw this figure reduced to around $360,000.

This is Big Tobacco taking up massive departmental resources in order to undermine anti-smoking measures - six people are being employed at taxpayer expense specifically to deal with these tobacco company requests. The requests being made by companies such as British American Tobacco Australia and Philip Morris Limited are beyond excessive.

Detailed requests originally sought 10,000 separate files of information at a cost of $1.4 million before negotiations saw that figure revised down to 242 files which still contain over 92,000 documents. That request will cost Big Tobacco over $300,000 but this will not meet the costs being laid out by the Department. These requests cost the Department money because FOI regulations do not provide for full cost recovery. We are seeing taxpayer money wasted as Big Tobacco continues this campaign against better health outcomes.

Freedom of information is an important democratic tool and should not be subject to abuse.

International tobacco companies spent $5 million on advertising during the 2010 election campaign, using a front organisation - the Alliance of Australian Retailers - in an attempt to prevent the introduction of plain packaging laws.

These FOI requests are being used in a way which is ultimately detrimental to public health. Tobacco companies are looking for anything which can undermine the work of the Preventative Health Taskforce and derail plans to introduce plain cigarette packets.

We know that smoking is our largest preventable cause of death and disease and yet the companies profiting from the sale of tobacco are actively engaged in a campaign to undermine the work to reduce this toll. This shows exactly how far Big Tobacco is willing to go in order to continue selling their lethal product.

Read the Information from the Department of Health.

Read about Tobacco Company spending during the 2010 Election.