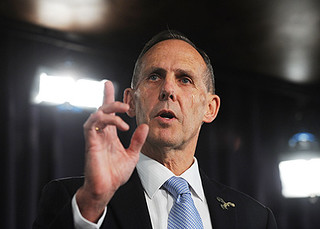 The Greens have succeeded in achieving commonsense amendments to the $42 billion economic stimulus package.

The Greens recognise the government's stimulus package is important to deal with the financial downturn. We have therefore worked co-operatively and responsibly to improve the package with amendments that deliver a better return for taxpayers.

The Greens have achieved initiatives which will create thousands of green jobs in communities across Australia, and provide greater financial assistance and support for unemployed and low-income Australians.

Our amendments provide a big environmental and social dividend. Through our urging, the national government is moving, like none before it, to apply energy efficiency standards to future housing, bringing Australia closer to best practice in America and Europe. This will lead to cheaper, greener and more comfortable housing for thousands of Australian families.

There is a multi-million dollar package for refurbishing Australia's neglected heritage buildings and the biggest ever commitment to bikeways, with more to come.

We believe a reduction in payouts to fund the amendments is better than incurring further debt. The Greens would prefer that the cash payouts, except to poorer Australians, had gone to infrastructure with long-term benefits and job creation and we will continue to apply scrutiny and constructive criticism to the $42 billion outlay.

Read the Greens' speeches in the Senate on the stimulus package:

Also, don't miss Christine's passionate speech about the ecological debt that our nation could be left with, if we don't act now.

LOCAL GREEN JOBS PACKAGE
The Greens have facilitated more than half a billion dollars in job creation in its Local Greens Jobs Package.

More than 10,000 new jobs will be created across Australia moving Australia towards the strong, healthy, jobs-rich, green economy long championed by the Greens

The Greens secured $60 million for projects involving the preservation of:

One off grants of up to $2 million will be made available for specific projects in communities that are ready to be implemented and employ people immediately.

Given the importance of generating local economic activity, it is proposed that where projects involve local infrastructure, funding be quarantined for the building of bike paths and the preservation of heritage buildings - both areas where there are known projects that are ready to commence.

Read more: Greens secure $60 million for National Heritage
Australia ICOMOS (International Council on Monuments and Sites)
National Trust applauds the Government and the Senate for the heritage funding in the stimulus package

The Greens secured Australia's biggest ever investment in cycleways to help everyone in Australia's cities by cleaning the air, reducing traffic congestion, creating hundreds of jobs and addressing the health, peak oil and climate crises.

The initial $40 million commitment will be followed by further investment through Infrastructure Australia.

Given the importance of generating local economic activity, it is proposed that where projects involve local infrastructure, funding be quarantined for the building of bike paths and the preservation of heritage buildings - both areas where there are known projects that are ready to commence.

In 2008, for the ninth year in a row Australian bicycle sales outstripped motor vehicle sales. And, Australians are not just buying bikes, they are using them increasingly frequently.

Census figures show a 28% increase in riding to work across Australian capital cities. This growth is largely centred in areas with superior levels of bicycle infrastructure.

Schools Infrastructure
The Greens ensured that the $14 billion of new school infrastructure will be designed for energy efficiency reducing their impact on the climate.

Proposals from the states for new social/community housing construction projects to be completed between 2008-09 and 2009-10 (Stage One) were to have been submitted by 15 March 2009, with allocations to be made by the Commonwealth by 1 April 2009.

Proposals from the states for Stage Two construction projects (with funds to be allocated from 2009-10 to 2011-12) are to be submitted by 30 June 2009, and the Commonwealth is to make allocations for suitable proposals by 30 August 2009.

The states were to have submitted proposals for repairs and maintenance funding under the Social Housing Initiative by 15 February 2009. The Commonwealth was due to have provided approvals by 1 March 2009.

At this stage, community housing organisations and industry are being ‘encouraged to approach their State and Territory Governments for advice on how to participate' in Stage Two.

MURRAY DARLING
The Greens exercised their influence in the Senate to deliver an economic stimulus package that supports the lower Murray, including $10 million of new money to rescue South Australia's Lower Lakes and create more than 100 local jobs there.

The Greens have gained $10 million in new money for the Lower Lakes for new bioremediation and revegetation trials in newly identified suitable sites in and around the Lower Lakes, in a process that would seek to engage and involve the local community.

BUSHFIRE COOPERATIVE RESEARCH CENTRE - NEW TRIENNIUM FUNDING
The Greens negotiated for three year funding of $5 million per year for the Bushfire Cooperative Research Centre in Melbourne and obtained agreement for the government to upgrade a Global Wildfire Research Centre.

The Australian Greens negotiated for all local councils in Australia to be eligible to apply for a share of $550 million under the February 2009 federal economic stimulus package.

In November 2008 the federal government allocated $300 million for the Regional and Local Infrastructure Program, $50 million of which was open to competitive tendering from local councils.

Only local councils which applied for funding in 2008 were eligible to apply for more funding under the economic stimulus package.

Many smaller councils found it difficult to apply in 2008 because of the tight deadline for applications and the requirement that projects start within six months.

Under the deal the Greens negotiated for all local councils to be eligible to apply for the $550 million put aside in the economic stimulus package.

The funds will be immediately available for local infrastructure works- supporting job creation in all local communities across Australia.

Councils and shires had until Friday 6 March 2009 to submit new or revised applications.

INCREASED EMERGENCY RELIEF AND OTHER SERVICES FOR THE UNEMPLOYED
The Australian Greens successfully negotiated amendments to the Government's economic stimulus package that create a better safety net for those most vulnerable and the unemployed, whilst also creating 10,000 local green jobs.

With some reports estimating an additional 300,000 Australians joining the unemployment queues in the coming 16 months, we must ensure that these ex-‘working families', who through no fault of their own are losing their jobs, are adequately protected.

Boost to Emergency Relief
The Greens negotiated a commitment from government to provide $50 million to fund innovative projects that help build the financial capacity of people on very low incomes including the unemployed.

Funds will be available to church, charitable and community organisations including those currently providing emergency relief and financial counselling to:

As part of this program, funding will be available to employ people with financial counselling skills.

This will ensure those services benefit from both the financial incentives offered by the chosen scheme and advice on long term management of budgets.

It provides funding for local organisations to offer a second tier of emergency relief and financial counselling that helps individuals build assets and economic independence after they have been assisted with initial emergency funding.

Relaxation of Liquid Assets Waiting Period for Unemployed
The Greens achieved a relaxation of the liquid assets test for unemployment benefits - from $2500 to $5000. This change will cushion the blow for those who are stood down as part of the expected downturn, making it easier for them to keep their homes and transition back into the workforce as the economy recovers.

Mechanism to ensure all employed and students have access to the bonus payment
The Greens gained a commitment from government that it will relax assets test for the unemployed, and ensure students are able to access the bonus payment.

Read more: Greens win support for most vulnerable and unemployed

INCREASE THE AGE PENSION
The Greens secured a commitment from the Government for a raise in the pension in the 2009/10 Budget. This will come as a relief to thousands of pensioners who have been struggling. The Greens have been campaigning for this for years.

The actual amount of the increase has not been specified. It is anticipated that the amount will not be announced until the Budget.

Read more: Greens win support for most vulnerable and unemployed

Government should drop plans to reintroduce the liquid assets test