Following the reporting of the Coalition’s new low of interfering with a Parliamentary committee in regards to recommendations on Newstart, the Australian Greens have renewed their call for an independent process to set income support rates.

“If correct it is appalling that Minster Fletcher intervened in the work of the Committee and shows exactly why we need an independent body to set income support rates”, Australian Greens spokesperson on Family and Community Services Senator Rachel Siewert said.

“The Select Committee on Intergenerational Welfare Dependence obviously looked at a wealth of evidence and unsurprisingly would have found that increasing the rate of Newstart would play a key role in addressing poverty. This shows the depths that the Coalition Government will sink to try and keep Newstart off the agenda.

“Today I’m referring to senate inquiry, the role of independent and expert decision making in setting payments and the adequacy of income support payments in Australia.

“MP’s from both sides of Parliament are treating people in desperate poverty like political footballs.

“Newstart needs to be urgently increased by at least $75 a week, as has been recommended by the social services sector and leading economists.

“The Coalition and the ALP needs to stop ignoring the sector who have done the research and support a $75 increase to Newstart now.” 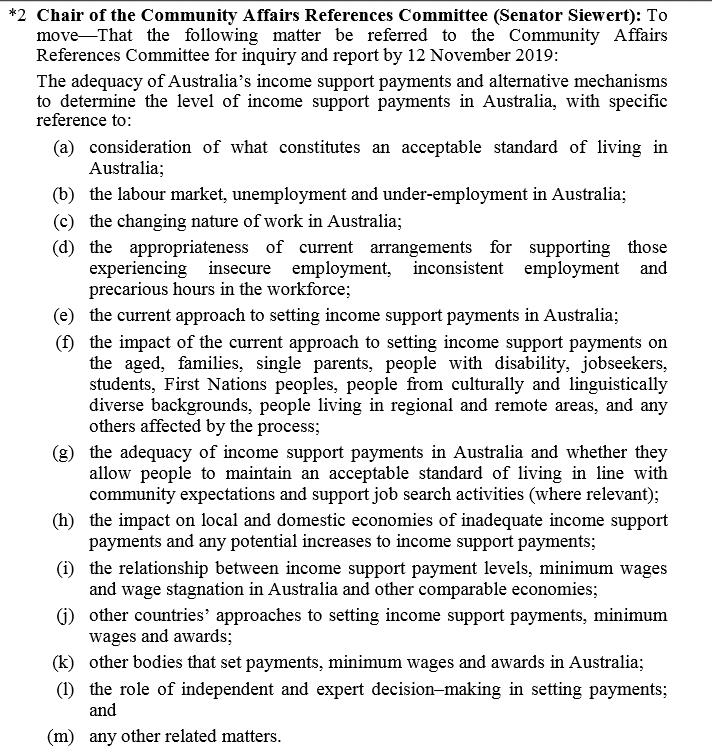 Government should drop plans to reintroduce the liquid assets test