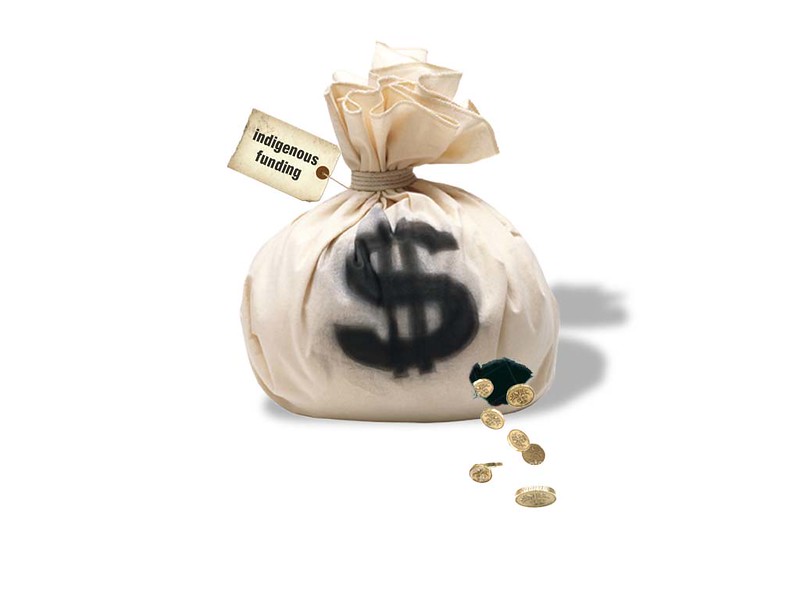 (Between Rudd's rhetoric on Indigenous Australians and budget commitments)

The level of spending committed to Indigenous disadvantage in the budget barely sets the Government on the right road to delivering on the Government’s election promise to actually 'close the gap'. Despite the rhetoric from the Government on closing the gap and their signing on to the pledge to deliver equality of access to services within a decade, the commitment of resources in the 2008 budget does not boost funding nearly enough to achieve this target.

The Government commitment amounts to additional expenditure of around $250 million per year across the entire Indigenous budget (that is, $1.2 Billion in new money over 5 years). But the biggest chunk of that ($666 Million) will be eaten up feeding the NT intervention juggernaut.
This is a small percentage of the $450 million needed each year to simply catch up on Indigenous health alone, and a far cry from what is really needed to fix the problem. Don't forget there's the estimated $2-3 Billion required to address unmet need on housing, not to mention the widening gap on education, community infrastructure and employment.

By comparison, Wayne Swan has poured $40 Billion into three large future funds - $20 Billion for roads and ports, $10 Billion for higher education institutions and $10 Billion for refurbishing hospitals and building major medical research facilities. While it’s possible in theory some of this money could be spent on Indigenous Australia, in practice there are not too many Aboriginal communities that have their own ports, hospitals, universities and major medical research facilities.

The problem is not simply the quantum of dollars in the budget – as we've seen over the last nine months in the NT, simply throwing money at an issue doesn't get you anywhere if you don't have a plan, are not properly partnering with communities, spending the money in the right areas and building on what is already known to actually work.

We are not seeing a strategic, co-ordinated approach at all – this is nothing more than piecemeal programs which fail to address the key underlining causes. More than half of the money already spent has gone on administration of one form or another and not enough funding has been allocated to programs that actually deliver services or infrastructure on the ground.

You only have to glance around to see Australia’s response to this under-funded section of the budget. Organisations such as the Human Rights Equal Opportunity Commission, the National Aboriginal Community Controlled Health Organisation, Australians for Native Title and Reconciliation and the Secretariat of National Aboriginal and Islander Child Care are all in agreement that the budget lacks sufficient funding to achieve the government's goals.
Scarily enough, even former Indigenous Affairs Minister Mal Brough agrees.

A large slice of the allocation is being taken up by continuing the inefficient and expensive Howard Government’s agenda. The Northern Territory Intervention is still causing huge problems for communities and huge resources are being put into administration rather than services. Take, for instance, the $109 Million spent on welfare and employment reform between June 2007 and April 2008.

The concerns voiced by the Greens at the introduction of the NT Intervention remain just as valid today. The need to consult communities and build effective partnerships to ensure on-the-ground outcomes; the value of building on what is already working and training up local people; the problems that would be caused by suspending the RDA and quarantining welfare payments … all remain huge problems.

With the Rudd Government’s announcement last month that Community Development Employment Projects (CDEP) would be re-instated, it’s clear that there is a slight change in the winds of bureaucracy for Indigenous Australia. While this is a signal that the Labor Government is prepared to take some steps to moderate Brough's boots-and-all military approach to the intervention, we are talking small steps, and these changes, while important, leave the core components of the intervention untouched.

There has been some damning evidence coming out of the recent Senate Committee inquiry into the emergency response consolidation bill, of an 'urban drift' of Indigenous Australians from rural and remote areas into regional centres (like Alice, Darwin and Katherine) . Non-government community service agencies and charities have reported a 300% increase in demand for emergency relief, and I can't help wonder about the well-being of the children of families living rough – especially when the wet season starts..

It seems that the focus of the NT intervention on welfare quarantining ahead of housing and child protection is only making these problems worse . It is very clear from the evidence received by the Committee that the legislation needs many more changes than the tinkering around the edges contained in the Consolidation Bill.

The suspension of the Racial Discrimination Act (RDA) continues to be a major source of concern, and failure to address community concerns that the broader legislation is racist will remain a sticking point for the new ALP Government in trying to better direct the intervention. Whilst the Government has recognised the issues surrounding the RDA by not seeking exemption on the new amendments, nothing has been done to alter the existing racism inherent in the original legislation.

With less than a month to go before the promised review of the NT emergency intervention commences, the Government seems ill-prepared to embark on such a major undertaking. During Senate Estimates, the Government was able to tell us very little about how it would proceed; the terms of reference were not available and the proposed Review Board has yet to be selected.
There has been no community consultation on the terms of reference for the review or its evaluation framework, despite significant community concerns having been expressed over the last nine months and so much hanging in the balance.

The message appears to be that the Minister will appoint a Review Board and the details of the review process will be largely left to their discretion.
The Rudd Government inherited this rushed and ill-conceived intervention from the former Minister Mal Brough, and Jenny Macklin has struggled to resolve the contradictions between its punitive approach and the ALP’s philosophical commitment to a social inclusion approach to disadvantaged group’s communities.
The two simply won't fit together.

The big question is which will go first – the values or the populist programs?